The alternator is responsible for charging your car’s battery. This powers all the car’s electrical components. If you need a Mission Viejo, CA alternator repair or replacement, call our mechanics at (949) 583-0811! Whether you own a Mitsubishi or an Infiniti, we are your best choice for an auto repair. We have over 25 years of experience with imported and Japanese manufactured vehicles! 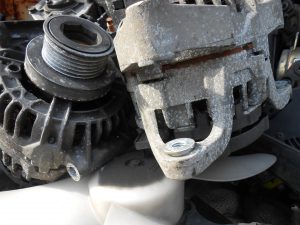 Some cars have a built-in warning light specifically for the alternator. In others, the battery light will come on (since any alternator problems will affect the battery). Flickering or dim headlights and electric features are also a signal of alternator failure. Specifically for alternators, noises like whining or rattling may signal a loose or worn belt. Sometimes, it can be hard to tell the difference between alternator and battery problems due to their similarities.

We want to keep our customers safe while they drive with our auto repair services. Let us take care of your Mission Viejo, CA alternator repair or replacement for your Japanese or imported car!